The strength of the Pomeranian Voivodeship is experienced companies handling orders for external investors in the offshore industry – as well as installations, design centers, projects, strong research and development centers and currently over 7,000 students of faculties with the sector.

The first wind farms will start operating in 2025, however Pomeranian companies are already specializing and implementing external ones. They include single-bearing wind turbines, design, meeting and rental of terminals, foundation lighting and connection complete with installations, service, installation and maintenance. Also specialized project creation and management and words for investors at the Port of Gdynia and the Port of Gdansk.

State of the art

According to the updated Polish Energy Policy, RES should account for at least 23% of total gross energy consumption in 2030. Pomerania is one of the leaders in RES production in Poland with a share of over 50% of total energy production. However, the demand for energy consumption is nearly two times higher than overall energy production in the region. Wind farms have the largest share in the production of renewable electricity (they generate over 90% of “green” electricity). The share of hydroelectric power plants is below 4%, and other sources have a share of about 4%.

The largest wind farms in the Pomeranian Voivodeship are located in the vicinity of Pelplin, Nowy Staw, Kopaniewo, Wicko and Zajączkowo. There are more wind power plants planned in the region. Pomerania’s potential in the development of the offshore industry

According to McKinsey&Company, 77 thousand people will be employed in the Polish offshore energy industry, related to the development of offshore wind energy. Educational facilities in Pomerania have the potential to service the demand for processing offshore investments in the coming decades. It is estimated that currently there are ca. 7,400 students in core degrees at Pomeranian universities.

More about the talent pool in Pomerania here.

Although the offshore industry in Poland is only just spreading its wings, the Pomeranian Voivodeship has developed this expertise for years. The region boasts of companies that are producers for the global offshore industry and in addition to the production of ships and installations for the offshore sector, the Pomeranian Voivodeship also has a vast number of ship design offices working on innovative projects.

Remontowa Holding is the largest shipbuilding group in Poland as well as a leading European manufacturer of offshore vessels. Remontowa Shipbuilding was responsible for the production of “Avalon Sea”, designed by Rolls Royce and commissioned by Secunda Canada.

CRISTshipyard in Gdynia is responsible for the production of specialist INNOVATION and VOLE AU VENT (VIDAR) vessels. These heavylift jack-up type vessels are used to install and operate offshore wind farms. Crist Shipyard was also responsible for the production of partially equipped hulls for SOV (Service Operation Vessel) to operate offshore wind farms

Mostostal has traditionally been a supplier of installations for underwater oil and gas extraction, as well as parts of the drilling platforms for leading contractors in the petrochemical and oil processing industries. Now they have added offshore projects to their portfolio, mainly for the Scandinavian market.

In 2020 the Industrial Development Agency decided to establish the Baltic Industrial Group (Grupa Przemysłowa Baltic) – it includes Gdańsk Shipyard (former GSG Towers), Baltic Operator, and Energomontaż-Północ Gdynia. The integration of the companies was to increase their chance to participate in the supply chain necessary for the implementation of Polish investments in the field of offshore wind energy.

In early 2020, the Nava Ship Design Office based in Gdansk presented its latest Nava WFSV 22 catamaran project. This crew transfer vessel is meant to be used in the offshore wind farms investments.

StoGda Ship Design Office, which has been operating for nearly 25 years, carries out many unusual offshore projects such as wave and tidal power plants, fish farms, oil vessels, jack-up vessels and other projects with CRISTShipyard.

Polish Register of Shipping is an institution based on the classification and supervision of compliance of manufactured ships, warships, industrial installations, steel structures, etc. with the requirements of its own classification regulations, international conventions and state regulations. PRS has been supervising offshore facilities since the end of the seventies.

For nearly 50 years Maritime Advanced Research Centre (CTO) has been conducting research and development activities for the shipbuilding, yachting, offshore and energy industries. CTO S.A. designs and delivers unique research equipment and performs product certification. CTO implements a number of programs, including those related to the offshore and RES industry. 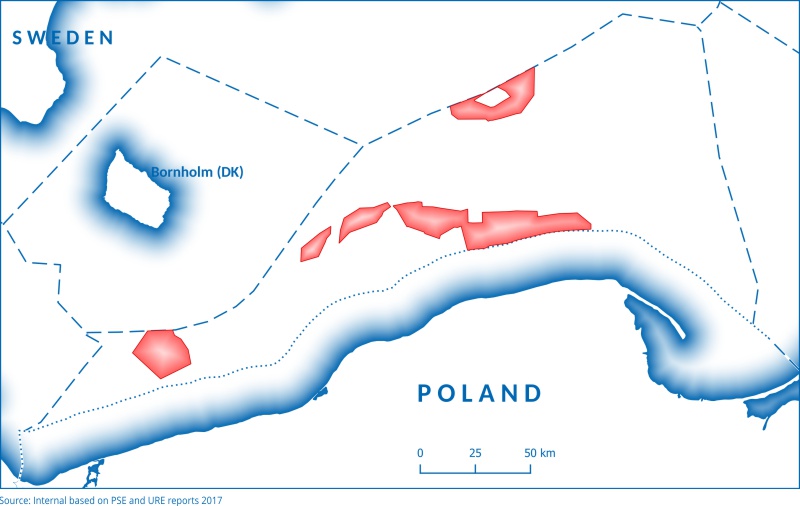 The relatively high number of Polish companies (ca. 100) have already ‘know-how’ and experience of being part of an international value chain in the offshore industry. However, some parts of the chain in Poland are still underdeveloped (e.g. nacelle, rotors and blades production and some stages of servicing installation process). Pomeranian companies contribute in terms of research and design solutions for industry as it is stated in the section above.

The development of the industry will have a strong impact on many sectors in Pomeranian Voivodeship including shipyard industry, ports, warehouses, cable production, components manufacturing, education, research institutions, financing and insurance, safety and even tourism.

Construction of wind farms in the southern part of the Baltic Sea will result in the inflow of new domestic and foreign investments in the region and create new jobs.

More about offshore in Invest in Pomerania Report here.