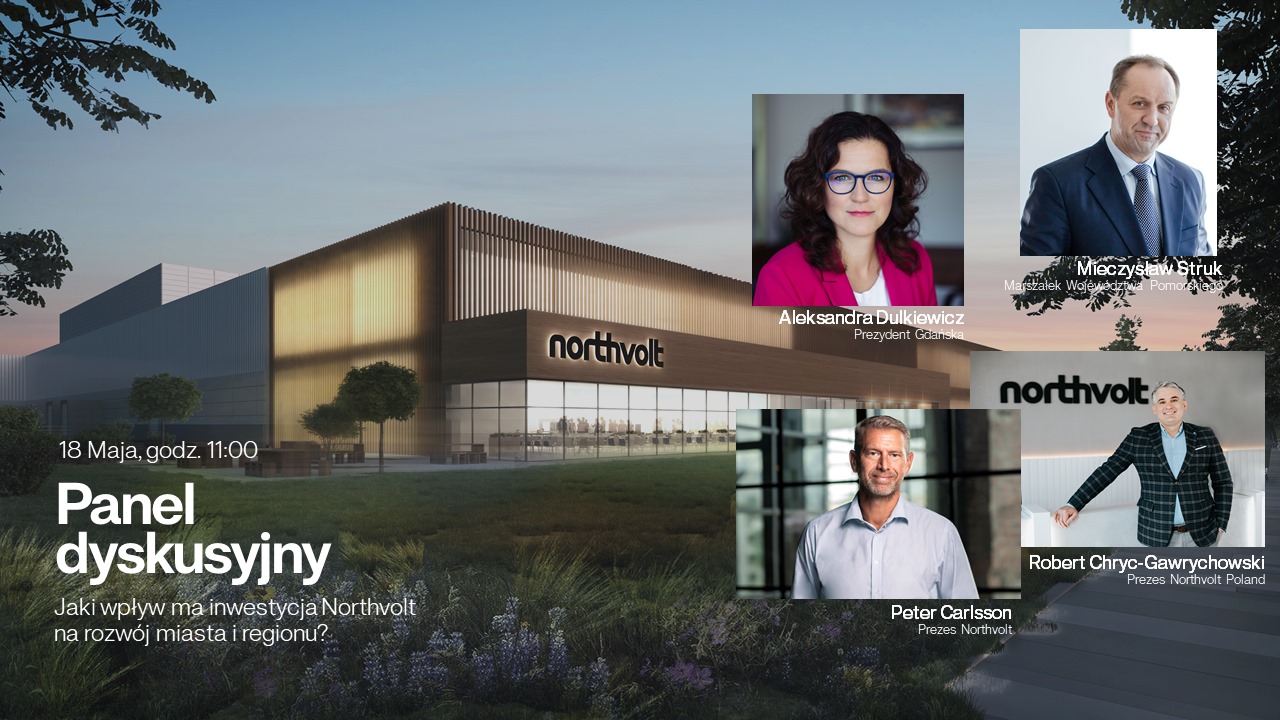 On Tuesday, May 18, 2021, a debate was held on the impact of Northvolt’s investment on the development of the city and the region, attended by Mieczysław Struk, Marshal of the Pomeranian Voivodeship, Aleksandra Dulkiewicz, Mayor of Gdańsk, and Peter Carlsson and Robert Chryc-Gawrychowski from Northvolt. The discussion was moderated by Piotr Ciechowicz, Vice President of the Pomeranian Development Agency.

During the meeting, Northvolt presented the investment – the largest plant in Europe producing energy storage systemst, that will  be build in Gdańsk. The $ 200 million investment will provide 500 jobs.

Northvolt is a company founded in 2016 in Sweden by former Tesla Vice President Peter Carlsson with a mission to build the world’s greenest battery with a minimal carbon footprint and the highest recyclability.

“We know that it is necessary to minimize the carbon footprint by 80%, which means a profound energy transition. Therefore, we must focus on renewable energy sources and electromobility.” –  said Peter Carlsson, president of Northvolt.

The company’s activity is to provide products that enable energy transformation and the transition from internal combustion engines to electric.

“In Poland, we managed to find talented and committed employees. We currently employ almost 150 people in Gdańsk, but we plan to employ 500 people in 18 months, ”adds Carlsson.

So far, Northvolt has received orders from its customers worth approximately $ 30 billion. Some of them will be carried out at a plant in Poland, which already has contracts that will use 90% of the factory’s production capacity.

“For Gdańsk, it is crucial to attract investors offering various jobs. Northvolt will also establish a research and development center that will employ specialists. We are happy about each investment, but this one especially, because it will create about 500 jobs and added value for the future of Gdańsk, Poland and the whole of Europe. ” – said Aleksandra Dulkiewicz, Mayor of Gdańsk.

The debate was an opportunity to raise issues related to the reduction of carbon dioxide emissions in the region.

“37% of European funds are allocated to the green deal, including thermal modernization, Renewable Energy Sources (RES), and the transition to electromobility. In Pomerania, we want to be a leader in the field of renewable energy and already half of the energy used comes from these sources. We focus on wind farms and industry related to wind energy. We also want to focus on electric rail transport. ” – said Mieczysław Struk, Marshal of the Pomeranian Voivodeship.

“It is important in our business that we create a closed circuit within Northvolt, consisting in the production of cells in Sweden, which we then use to build battery systems in Poland. Used or damaged battery modules will be recycled in a plant in Sweden, and the recovered material will be used in the production of cells. By 2030, we would like 50% of the material used to come from recycling – says Robert Chryc-Gawrychowski, President of Northvolt Poland.

An important partner of Northvolt is the Volkswagen group, for which Northvolt in Sweden will complete an order worth $ 14 billion by 2030.

Due to the clear direction of automotive concerns focusing on the expansion of the range of electric cars in their portfolio and the gradual abandonment of internal combustion engines, the demand for battery systems is growing extremely dynamically. This tendency is also indicated by the Invest in Pomerania report, the premiere of which took place during the event. You can read the report at this link.

The debate was followed by a tour of the Northvolt factory, which has been operating in a temporary location at Elbląska Street in Gdańsk since October 2018.

Northvolt is a European supplier of high-quality cells and battery systems, produced in an environmentally sustainable manner. The company was founded in 2016 with the mission of building the world’s greenest battery with a minimal carbon footprint and the highest recyclability to ensure Europe’s transformation towards a decarbonised future. Northvolt employs over 1,100 employees of 76 different nationalities with locations in Sweden, Germany and Poland. Northvolt’s business partners and customers include, among others ABB, BMW Group, Scania, Siemens, Vatenfall, Vestas and Volkswagen Group.

Since 2018, the company has been operating in Poland under the name Northvolt Poland Sp. z o.o. The company was established to meet the growing demand for complete battery systems. In the plant in Gdańsk, it produces energy storage systems and battery modules that replace internal combustion engines in machines used in industry. Currently, Northvolt Poland plans to increase its production capacity by investing 200 million dollars in Gdańsk in the construction of a highly automated production plant with an area of ​​50,000 m².