The Tech Cities of the Future ranking by fDi Intelligence X TNW is focused on finding those European cities with the most promising prospects for start-ups, tech and innovation investment.

The jury evaluated strategies implemented by local governments of 50 European tech communities in terms of developing a globally connected and supportive ecosystem aimed at facilitating the growth of innovation. The Tricity was ranked #4 just behind heavyweight champions like London, Barcelona and Berlin!

Building on the “we care more” creed, what distinguishes the Tricity from other Polish cities is its pioneering vision for the building of diversified human resources based on openness to migrants, rooted in the Hanseatic traditions.

The awareness of the added value of diversity and its enormous potential for boosting economic and social growth is shared by all sectors and milieus: local administration, businesses, academia and social organisations. The immigrant integration and the equal treatment models, constitute a practical implementation of this vision. 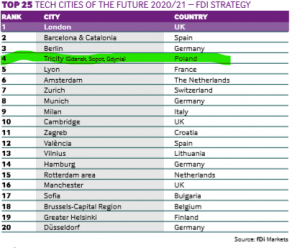 Most of the ecosystem in the Tricity is symbiotic in nature. The majority of the efforts are either spearheaded by, driven by or heavily invested in by Invest in Pomerania, an initiative by the region to have a single-window service for investors to access the region.

The region cohesively and seamlessly brings together all the players to offer a synchronized and unified interface consisting of extensive and in-depth toolkits, single-window services, tech visas and much more.

Its an economy based on creativity, cooperation & a friendly business environment, where the R&D meets the needs of businesses; tapping into the international flow of information, knowledge and economic cooperation. Promotion of innovation in business and transfer of knowledge to the economy, the concentration of resources supporting smart regional specialisation using clusters as a tool, strengthening of external links and connections of the regional economy, professionalisation of businesses and adaptation of education to the labour market requirements.

Strategic location in terms of connectivity and access to both local, domestic and international markets. A world-class education system with public-private partnerships and innovative courses.

Being ranked #4, shows that we have the batting power against powerhouses like London, Barcelona and Berlin. It also challenges us to grow faster, better and more sustainable. And, challenges are something that excite us… So watch out world!

The full report: Tech Cities of the Future report.